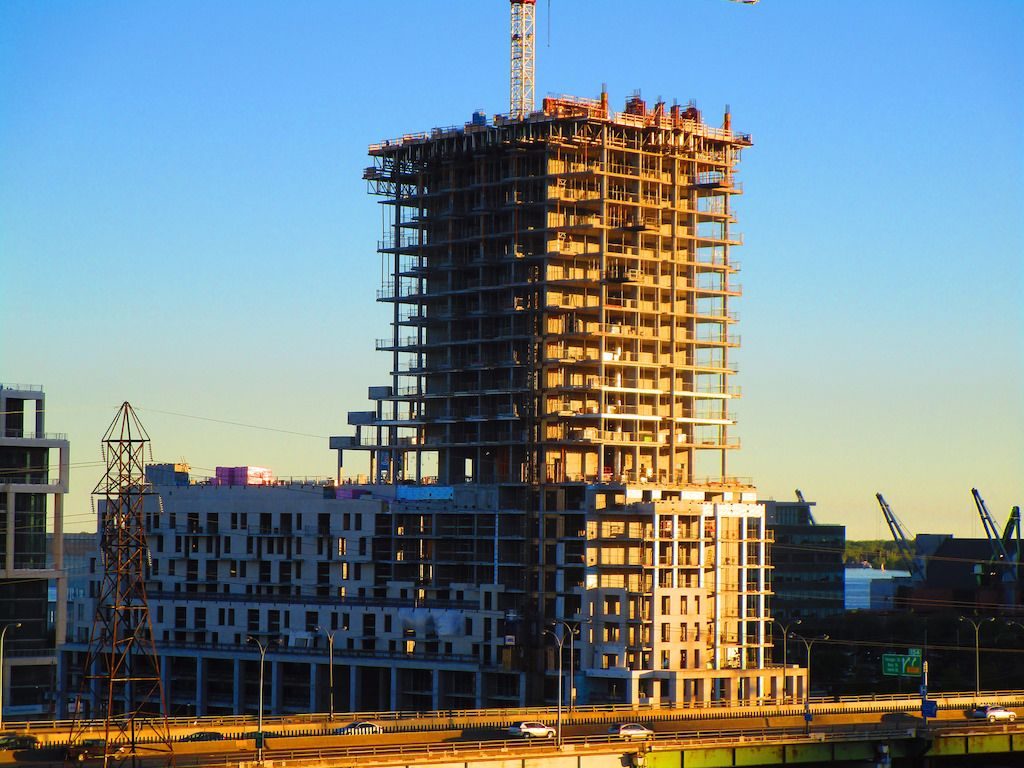 A slow month or an end to Toronto’s condo boom? What new homebuilding data may mean…

Canada’s national housing agency suggests the recent downturn in the rate of condo construction in Toronto is not the sign of a bigger long-term trend.

“The overall pace of new home construction remains stable as strong demand for new homes in the Toronto CMA continues to persist,” says Dana Senagama, a principal market analyst for the Canada Mortgage and Housing Corporation (CMHC), in an email statement.

The rate at which contractors broke ground for new homes in the Toronto CMA in September was down 7 per cent from the same time a year ago, according to CMHC.

Declines in the condo segment led the way, with multi-family starts plunging 49 per cent on a month-over-month basis, according to Scotiabank Economics analysis.

CMHC’s Senagama cautions that the monthly figures for multi-family homebuilding activity lend themselves to fluctuations. “Monthly variations in high-rise starts are typical given delays in getting large scale projects off the ground.”

A housing start is the term used to refer to when construction work begins on a home. CMHC visits sites, using building permits to identify them.

A spokesperson for CMHC says the agency will be releasing its next Housing Market Outlook on October 26th providing trend analysis and forecasts.

Shaun Hildebrand, senior VP of Urbanation, a Toronto-based firm tracking the condo market, agrees with CMHC’s remarks on the volatility of multi-family starts.

“I wouldn’t read too much into it,” he tells BuzzBuzzNews of the numbers. “The level of apartment starts over the past 12 months is at 20,000 units, which is fairly healthy, if not low given current demand,” he adds.

Actually, Hildebrand predicts the opposite of a slowdown for the Toronto condo market looking ahead.

“Condo apartment construction is definitely going to be increasing in the near future, given the level of pre-construction activity witnessed this year,” he explains.

Halfway through this year, developers had launched a total of 38,750 condo units for sale in Toronto, a five-year high, according to Urbanation data.

The projects containing these units were 87 per cent sold in the pre-construction phase, yet developers normally need to sell just 70 to 80 per cent of the units in a project to get it financed, Hildebrand says.

“As a result, I expect [Toronto] condo starts to see meaningful growth next year,” he adds.

Neither the foreign-homebuyer tax for the Greater Golden Horseshoe nor the more robust rent control of Ontario’s Fair Housing Plan, announced in April, have had a considerable impact on Toronto’s condo market, according to Hildebrand.

As an indicator of housing activity, condo starts lag by about a year, he notes.

“New condo buyers in Toronto have been almost completely unfazed by the foreign buyer’s tax or the extension of rent control,” Hildebrand states

“Things so far are playing out much like they have in Vancouver following the introduction of their foreign buyer’s tax, with condos outperforming the rest of the market.”

A record number of dwellings are under construction in Vancouver’s census metro area roughly a year after the BC government tacked a 15-per-cent foreign-homebuyer tax on Metro Vancouver, according to CMHC.

“New home construction in the Vancouver CMA is being supported by population growth, a strong local economy, and low financing costs,” says Eric Bond, another principal market analyst for CMHC.

Although the pace of home sales in Toronto has been cooling following the province’s affordability measures — echoing the Vancouver market’s reaction to policy introduced there roughly a year ago — Josh Nye, an RBC economist, suggests this is not behind the September construction declines.

“Ontario finally saw a moderation in starts in September although it would be a bit of a stretch to attribute it to the recent slowing in resales — the province’s quarterly pace of housing starts was still the second-fastest in a decade,” he wrote in a note.