Global economies are becoming more interconnected, and so are real estate markets. Researchers at the International Monetary Fund (IMF) measured prices in 44 cities, and 40 countries – both in advanced and emerging markets. What they found is that whole countries are seeing real estate prices in the closest synchronization since the Great Recession. Even weirder, this is the first time that whole countries are moving in synch, at the same time as major cities. Not even around the Great Recession did we see that. Cool observation, right? It’s less cool once you realize we may have just entered a global real estate supercycle.

In order to understand why this is important, first you need to understand the real estate functions in a cycle. Markets generally move in four stages — recovery, expansion, hypersupply, and recession.

Recovery: The first (or last stage) comes right after the recession. Builders are scouting new locations at rock bottom prices, but not much building gets done during this phase. People aren’t super excited about shows on HGTV here.

Expansion: This is when we see the economy boom, vacancies decline, and new construction start. Prices start to rapidly escalate and peak. You’ll start to notice a lot of cranes emerging from big smoking holes in the ground. People love HGTV again.

Hypersupply: Since real estate was such a good investment, middle class folks double down and create speculative demand. They turn their profits into gambles, and drive a lot of that pre-construction during the end of the expansion. Eventually those pre-construction units hit the market, and many middle class tears are shed. People make fun of HGTV shows here.

Recession: A combination of high household debt from buying at peak, as well as losses during the hypersupply, eventually lead to a recession. Debt isn’t all that complicated, it’s borrowing from your future income, and the country’s economic growth. This eventually leads to a lack of consumer spending, and decimating local employment. People loathe the happy people on HGTV here.

The whole cycle then repeats, and repeats. Everyone is shocked every time. There’s some more to it, butwe’ve covered this before so head over if you want more details. The cycle was first observed over 100 years ago by an economist by the name of Henry George. Now that you’re up to speed, try to spot the issue before we explain it.

IMF researchers observed home prices are moving together in both advanced and emerging economies. To measure it this, they created a median term synchronization scale. It sounds fancy because it is, it captures how closely prices are moving together. The scale measures home prices in 44 major cities, and 40 countries, breaking them down into advanced economies and emerging markets. The chart plots in negative values, and the closer they get to 0, the closer they are in synch. Today we’ll just be looking at advanced economies.

Synchronization of price movements in advanced economies, at both the country and major city level. 0 is perfect synchronization. 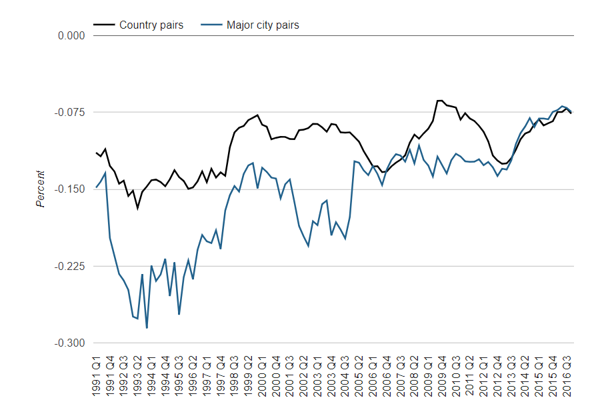 No, Every Advanced Country And City Is Not The Next Manhattan

We know, your real estate agent told you density and housing scarcity is to blame for price increases. We bought into it for a second, until we realized that even agents in Papa New Guinea were saying they were the next Manhattan. IMF researchers offer a different explanation than a rise in fundamentals. The increasing financial integration of the world.

Institutions and wealthy investors were looking for the same thing – yield. Researchers noted these groups of investors began chasing yields, looking for better returns in the low interest rate environment. They specifically callout markets such as Amsterdam, Melbourne, Sydney, Toronto, and Vancouver. Thisisn’t something new to regular readers, but always nice to see academia get up to speed. In a few years, they’ll probably even learn there’s a whole platform dedicated to selling whole condo blocks, reserved just for ultra-wealthy Asian families.

My brief explanation of real estate cycles wasn’t just an unrelated rant. The increasing synchronization means we’re seeing advanced economies hitting the same phase, at the same time. Investor demand is leaving vacant homes around the world, and cities like Toronto, Vancouver, and London can no longer sell to locals at these levels at the volumes needed. We’ve likely just finished an expansion phase, and are seeing the first signs of hypersupply. Keep an eye out for falling prices around the world.

The increasing synchronization of real estate prices is great during a boom, a.k.a. an expansion phase. Money flows across borders, and the vast majority of middle class homeowners see paper gains far exceeding their wages. The big problem is that strength is also a huge vulnerability, leaving all countries at risk from shock from a single country.

You no longer have to worry about your neighbours paying their bills to kick off a collapse of your housing market. You now have to worry if someone 3,500 miles away bought too much house in your neighbourhood. Economic shock to a real estate market in one part of the world, can now lead to a domino effect across the globe. Now we’re starting to see global hypersupply appear. Pop quiz, does anyone remember what comes after hypersupply?