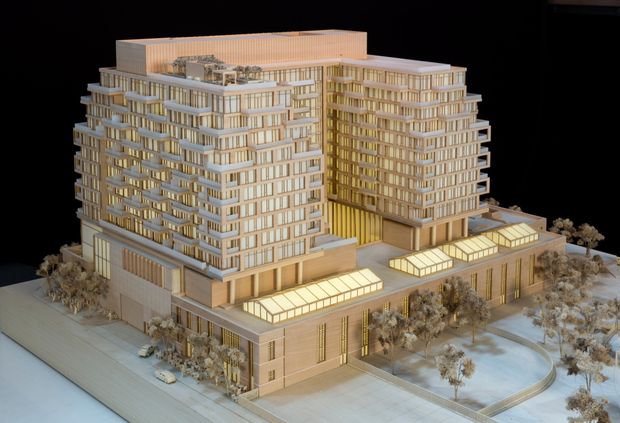 Mixing it up: Toronto developers add community amenities to their condo projects

See the complete article in the Globe & Mail

When Gary Switzer and his partners, Noreez Lalani and Eve Lewis of Woodcliffe Landmark Properties, decided to bid on redeveloping a historic Toronto waterworks site, they knew going in that the project would be, as he puts it, “challenging, time-consuming and expensive.”

“As a developer, you have to be personally interested in doing these kinds of buildings,” said Mr. Switzer, CEO of MOD Developments Inc. “This isn’t for the faint of heart.”

The project, on Richmond Street west of Spadina, is nothing if not packed with moving parts: a heritage building on a tight parcel of land that already contains a small park with a playground. It sits in a high-growth downtown precinct where both the current and previous councilors have been outspoken about the need for more public or community amenities. And because the land and the structure belonged to Build Toronto, the city’s real estate arm, municipal officials were in a position to dictate terms.

Now being marketed, Waterworks includes public amenities, such as a 54,000-square-foot YMCA, with a pool, gym and fitness centre, as well as a food hall and 15 affordable units to be managed by Artscape. The design team consists of Diamond Schmitt Architects Inc. (DSAI) and ERA Architects, which specializes in heritage.

Waterworks is one of a growing number of complex mixed-use Toronto buildings that feature not just condos and some commercial space at grade, but also community or non-profit occupants ranging from arts organizations to homeless shelters. In many of these, moreover, the community partner isn’t merely a tenant but enjoys a more permanent type of tenure arrangement.

According to University of Toronto geographer Matti Siemiatycki, the city has built a strong track record with such projects as more developers and civic institutions learn how to navigate an approvals process that can be far more daunting than the typical building application. He’s counted about 60 of these projects with partners from sectors such as arts, education, recreation, libraries, social services and churches. “To my knowledge, the model is more widely used in Toronto than elsewhere,” he said.

He said the trend is being fuelled by a hot construction sector and a chronic shortage of public funding for community amenities, especially in high growth areas.

In two recent academic studies, Dr. Siemiatycki examined a number of these deals, including the TIFF Bell Lightbox, Ryerson University’s refashioning of Maple Leaf Gardens and Tridel’s partnership with the Toronto District School Board to incorporate a high school in the podium of a midtown high rise – a proposal he notes was hotly opposed when it was initially bruited, but has proven successful.

“These deals take a long time and are unpredictable,” he said, adding that they “end up solving problems for each partner.”

Mr. Switzer, an architect by training and a one-time City of Toronto planner, said public-private development deals are not a new idea. He cites examples such as Chicago’s venerable Sullivan & Adler Auditorium Building, which contained offices and a hotel to cross-subsidize an opera house. More locally, the St. Lawrence Neighbourhood in the 1970s was designed to provide co-op or condo apartments with schools and other community amenities in the podiums.

MOD has had previous experience with such ventures. For Massey Tower, the company did a land swap with Massey Hall, constructing a joint basement/foundation that supports the residential tower, now under construction, and, soon, the planned addition to the storied music venue.

With Waterworks, Mr. Switzer points out that he and Woodcliffe turned to DSAI, which had previous experience dealing with institutional clients as well as builders such as Daniels Group, which has completed complicated public-private partnerships with Toronto Community Housing, Artscape and TIFF.

In other cases, these deals have emerged from highly fraught circumstances and involve partners with scant experience. Dr. Siemiatycki points to the case of Red Door, a 106-bed shelter for families with children that had operated out of an old United Church building at Queen and Carlaw since 1982. (The name refers to a former minister’s Depression-era decision to paint the door of his east end church red to signal destitute families where they could find refuge.)

After the church decided to sell the property in 2010, Red Door tried to work out a deal with a local developer, but the arrangement went sideways and the property ended up in a bankruptcy proceeding. Harhay Developments acquired the site, intending to build a conventional mid-rise condo.

Faced with eviction, Red Door’s board approached Councillor Paula Fletcher. The shelter marshalled the support of thousands of local supporters, and the city ultimately negotiated what Dr. Siemiatycki describes as a “unique” arrangement. Harhay received the right to go up one extra storey and struck a deal that involved the city owning a new 94-bed annex attached to the back of the condo, which the developer is building. Red Door manages the space and is in the midst of a $3-million capital campaign.

Dr. Siemiatycki observed that the facility is permanent because it’s not just a tenant. What’s more, he argues, the highly public and at times politicized process for inserting the shelter into a high-end building ultimately served to break down stigmas and build public acceptance for the sort of community service that’s frequently shunned, especially in affluent or gentrifying neighbourhoods.

Ms. Fletcher said projects such as Waterworks are more predictable because the city owns the land. With private deals, she said, “my philosophy is, if you’re building something, why wouldn’t you put in something more?” But, as she adds, much depends on the developer, which is also true of city-owned projects.

Not all of these ventures work out, of course. Case in point: the non-profit Toronto Media Arts Centre inserted into an UrbanCorp. condo on Queen West near Dovercourt before the developer went bankrupt. The project proponents, the receivers and the city have since been struggling to launch the facility, which was intended to replace arts spaces lost to gentrification.

As one of a growing number of Toronto builders drawn to these kinds of challenges, Mr. Switzer said that if the city wants more of these kinds of partnerships, it should be willing to waive or reduce levies on projects that are providing public amenities.

He and Dr. Siemiatycki agree that if the city wants more of these public-private development joint ventures, it will need both political and bureaucratic “champions” who can stickhandle projects that involve the sign off of far more city departments and public consultations than normal.

But Ms. Fletcher, who filled that role, believes the other key to unlocking this puzzle involves proactive changes to land use planning policies. In the case of the Harhay/Red Door project, the city in 2015 approved an official plan amendment for the site that specifically called for the retention of the shelter.

“I think every site should have valued added if possible,” she said, citing a forthcoming project on Eastern Avenue that will include space for a small business incubator. “Many developers are willing to do that. They want to have their stamp on [these projects].”