See the complete article in the Better Dwelling

Canada’s most expensive rental market is no longer Vancouver, as prices fall in the city. Numbers from rentals.ca show over half of Canadian cities saw 1 bedroom rental prices rise in June. The rise, combined with Vancouver’s fall, crowned Toronto the most expensive market.

Toronto Replaces Vancouver As The Most Expensive Rental Market

Toronto replaced Vancouver as the most expensive market in the country. Toronto had an average list price of $1,862 in June, up 1% from the month before. Vancouver fell just under to $1,833, down 5.4%. Richmond Hill, a suburb of Toronto, came in third at $1,721, down 0.7% from the month before. Spots 4 through 6 were also suburbs of Toronto, as last year’s condo gains transfer to secondary rental prices. 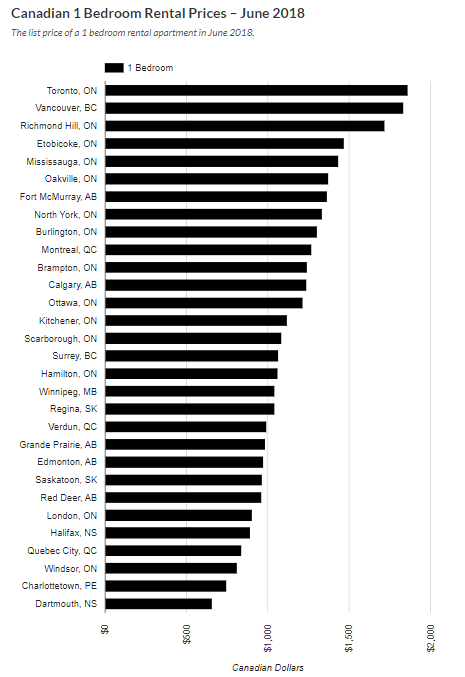 The fastest falling rental prices were in Vancouver, Surrey, and Windsor. Vancouver’s  $1,833 one bedrooms in June are a massive 5.4% lower than the month before. Surrey saw the average list price fall to $1,064, down 2.7%. Windsor prices fell to an average of $810, down 2.4% from the month before. All three of these markets are currently seeing falling real estate prices as well.

Generally speaking, the rental market trails real estate purchase prices. One month doesn’t make a trend, but it does show that rental prices can move in both directions. A correction in home prices, can lead to a correction in secondary market rentals prices.