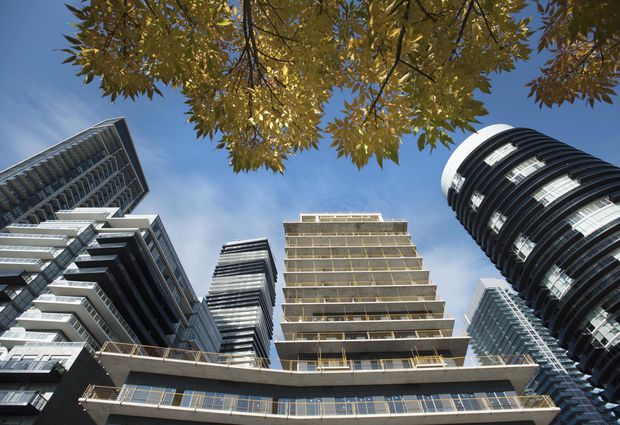 Toronto condo rents up 9.1 per cent

SHANE DINGMAN
SPECIAL TO THE GLOBE AND MAIL
PUBLISHED JANUARY 18, 2018UPDATED 22 HOURS AGO

Rents for condominiums continue to rise rapidly in the Toronto area according to new data from Urbanation Inc., but there are signs of trouble ahead for landlords and investors as the combination of an affordability crisis and the province’s new rent control regime are keeping tenants in their apartments longer.

The bad news for renters was that among the 5,094 condo units leased through the Multiple Listing Service in the fourth quarter average monthly rents topped $2,166, that’s 9.1 per cent growth year-over-year.

Rent growth happened most rapidly in the core of the city, where prices jumped more than 12 per cent, but renters seeking relief in the 905 suburbs also pushed rents up 8 per cent in those regions. Rents rose fastest for studio apartments, up 11 per cent year over year to an average $1,665 per month. Average rates for one-bedroom and two-bedroom units also rose, up 10 per cent and 8 per cent respectively.

“I still think rents have more upside,” says Shaun Hildebrand, senior vice-president for Urbanation, a real estate consulting firm that focuses on the condo market. Hildebrand sees no immediate change in the market fundamentals (low inventory, high demand) in 2018. “I don’t expect [rents] will continue to grow by 9 and 10 per cent, maybe 4 or 5 per cent,” he says.

Even though developers have moved to cash in on the hot rental market – there are now more purpose-built rental units in planning than there have been in 25 years – of the 7,000 apartment units under construction now, only about 2,000 units will come to completion in 2018.

“That’s nowhere near enough to satisfy the level of rental demand in the GTA right now, says Hildebrand, who says that 2018 will continue the trend in recent years of almost all new rental supply coming from the condo market. At the same time, Hildebrand says even that supply has taken some hits as over the past three years a larger share of condo investors have sold their units once they are complete to cash in on the incredibly hot market; in 2017, four per cent of new owners flipped their units, up from three per cent in 2016, and two per cent in 2015.

“It’s terrible that all of our rentals are coming from the condo market,” says JohnPasalis, president at Toronto’s Realosophy Realty.

“That’s non-permanent rental inventory. Those units can become owner-occupied, all this supply you’re theoretically building can disappear five years down the road if people want to move into them.”

Pasalis also spotted another clue in Urbanation’s numbers that could put pressure on the condo rental supply in the future. The new provincial rent controls are already having an impact on factors that could make condo renting a less lucrative asset for the mom and pop investors who have no intention of living in those units.

Urbanation says the average length of time between “same-unit lease transactions” was 22.8 months in the fourth quarter, up dramatically 2016 when it was 19.7 months and 2015 when it was just 16.4 months. Essentially, renters are staying in their condos longer: “It increased a lot in the last few months of the year, I don’t think that’s a coincidence that its happening after the rent controls have come in,” Hildebrand says.

In May, the province expanded rent controls that previously only applied to units built before 1991. Where once owners of newer units could raise rents or evict tenants almost at will, now rents can be raised according to a guideline, currently a maximum of 1.5 per cent a year.

Effectively, Pasalis says, tenants who have been living in a $2,000 a month condo apartment for two years could expect to pay $400 more per month for the same unit if they moved. Naturally, fewer are moving.

“I have [purpose-built] rentals, our turnover is negligible, our average tenant has been there for seven to eight years. I don’t think condo investors are ready for that,”Pasalis says.

“Over time you’re going to start seeing fewer condo investors buying them, because it’s actually not a great investment any more.”